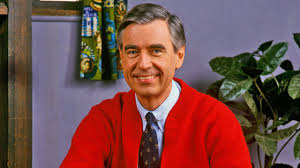 At least once a year, I re-read Tom Junod’s article on Mr. Rogers in the November 1998 issue of Esquire magazine. The theme of the issue was new American heroes, and Mr. Rogers, wearing a red cardigan, was featured on the cover.

With each year that passes, the truth of the article, its simplicity and profundity, and importantly, the excellence of the writing that does justice to the man, becomes clearer and clearer. Fred Rogers was so concerned about children and what they were watching as pie-in-the-face “children’s programming” on television, that he spent the rest of his life making TV programs that would teach children about themselves, their families and their communities; that would teach them they were lovable and capable of loving.

He accomplished this through interviews with people from the neighborhood; in visits with various professionals at their work sites; through music––he himself was an accomplished musician and composer; through puppetry; and all of this with a small cast of regulars who acted out make-believe from scripts written by Mr. Rogers.

Tom Junod had the courage as a writer to not distance himself from his subject. He was drawn in by the accessibility and sincerity of this American hero, this American saint. In these challenging times, when true heroes are scarce, here is a model that deserves emulation and celebration. Who––man or woman––has the existential courage to embrace it? A measure of humility would help with that.

You can read the entire article at

Chapter 19 of How It Was When My Mother Died concludes this collection of interviews.

I thank the women for their stories, which have proven timeless. My tears flowed readily, a witness to that timelessness as I typed in the stories after all these years. The effect of a mother’s death on one’s life is timeless. It goes on in thought and dream, even as she goes on, as she continues to be in her life as it is now.

Last thoughts from several of these motherless women …

Of her Finnish mother Aino, Hannah observed, “She was just always there and then she wasn’t.”

Janet remembered the first snow after her mother Rosina had died. “There was something about the ground freezing and the snow covering her. It was so final. That first winter was very hard.”

And Mariaelana’s thoughts are meaningful for many of us who have lost our mothers. “I feel like an archeologist when they dig. I feel like I’m the top layer, the foundation for my children. I am on top of my mother and my grandmother. Now it’s my turn. I need to know my past. I need to let my children know their past. It’s what’s embedded in them. I hope I’m good soil for them to set their roots in.”

Good soil indeed. Our mothers gave us the gift of life. May we all be good soil for the seeds planted in us and meant to grow, bud, blossom and be fruitful. Even as our mothers gave us life, may we do likewise for others as we can.

DEBRA AND HER MOTHER, MARY

My mother and I were working part-time at the same place, which kind of interfered with the relationship because I started working at the place after she did, and I feel that in some way I kind of invaded her territory. So, until we got used to this, I felt that our relationship was on a roller coaster of sorts. My friends were suddenly her friends and vice versa. My mother and I had always enjoyed a very, very close relationship, which was more one of close friends than mother-daughter. I think that given time, we were able to let go of the feelings we had concerning some of the problems we had working together and my mother had become very proud of me and let me know that on a daily basis. I’d walk into work and she’d kiss me.

I guess it had been several months she hadn’t felt well. She went to several doctors, back and forth, and nobody seemed to come up with anything concrete. And I from time to time felt, then nothing must be wrong. If they can’t find anything wrong with you, then you must be all right. Don’t worry about it. Don’t complain about it.

One day she wasn’t feeling well at work, and she came to the department where I was working. She was flushed. She looked very tired and she appeared to be very weak. She said, “Debbie, I’m not feeling well. Could you please take me home?”

And I didn’t. I had an appointment with a physical therapist. I had just returned to work after being out for five weeks with a back problem. I can remember her saying to me, “That’s okay, honey. I’ll get Dad to take me home.” My father also worked there. I think the reason I told you this is that in my mind, this is the last thing my mother asked me to do and I didn’t do it. When I have those quiet times, this is the sort of thing that pops into my head. This is one of the last things she asked of me and I couldn’t give it to her.

END_OF_DOCUMENT_TOKEN_TO_BE_REPLACED

POLLY AND HER MOTHER, GERTRUDE

I made them go from a $1200 casket to an $800 casket because my mother wanted to be buried in a pine box. She would have been real pleased to have the $800 instead of the $1200 because that was her lifestyle. She said she felt real terrible that she didn’t have any insurance to pay for the burial expenses. She felt bad to have us kids pay for her funeral. What I said to her was, “We’re going to pay for your funeral with the rent for renting your house. So you’re going to end up paying for your own funeral.” She slapped her leg and said, “Good! That’s the way I want it.”

I hate to see white in a casket if you’re going to have it open. We picked out a suit that I happened to give her. It was cranberry and white check. The funeral director called some company somewhere that made a special cranberry lining and I didn’t mind paying an extra couple hundred for that.

END_OF_DOCUMENT_TOKEN_TO_BE_REPLACED

CINDY AND HER MOTHER, DOROTHY

We had a phone call in the early morning. I think it was Tuesday of that week. Monday or Tuesday, probably around school rising time. A little earlier. It was my sister Martha. She was crying. I knew that something was the matter.

She said, “It’s not who you think it is. It’s Mom.” She said that she had had a major heart attack and she was in Newton-Wellesley Hospital and they didn’t know what was going to happen. My reaction was, I’ve got to come down. “No, don’t come down yet. Wait a while.” I just started to cry.

She was in intensive care. Nobody was allowed to go in there. Travis [brother] had gone to the hospital with her in the ambulance. She didn’t want them to call an ambulance. She said things like, “I wish I were home.” “I don’t want this to happen here.” Martha did get to go to the hospital and she did get to see my mother. They used the word “agitated.” Her condition was “agitated.”

After the phone call I went back up to bed. I remember lying there crying with a sense of disbelief and devastation. I was supposed to go to work at Head Start. That was the day we were going to have the big Thanksgiving dinner with parents and kids. I called Polly [friend and co-worker] and told her I wouldn’t be in. I had this feeling, maybe this was going to go away. I was thinking, I’ve got to go to work. I’ve got to be there.

END_OF_DOCUMENT_TOKEN_TO_BE_REPLACED

ELLEN AND HER MOTHER, RUTH

She was a martyr really. She was part of the disease as a codependent. At that point, if you knew it was a disease, maybe something can be done. She made choices. She allowed that to happen. Why didn’t she do something about it?

She was a real lady. She could entertain in a proper way, very fine and sweet. I really think a lot of her cancer was caused by stress. She was in all sorts of clubs, garden clubs, the church. She worked up until about six weeks before she died. She was the assistant librarian in the North Reading Public Library. She was the typical mom, only worked part-time. She was always there at home.When I was an adult, she worked full-time. She was in the public a lot. Everybody knew my family.

END_OF_DOCUMENT_TOKEN_TO_BE_REPLACED

COLETTE AND HER MOTHER, ANNETTE

It almost seems like––I can’t bet my life on this––but it almost seems like my mother died a long time ago. That role reversal happened a long time ago. I can remember in high school doing the things that the woman of the house would do, like going to the laundromat, coming home from school and cooking supper, cleaning house. My older sisters were married at that point and I was the oldest girl at home.

Also at that point, I went to college after high school and I was living at home, and then I went to Canada. When I got back from Canada, my mother could hardly walk at all, and she was in pain all the time. It was then it was decided she was going to have her hips replaced. Arthritis. This was going to mean a minimum of six weeks to two months in the hospital. I was nineteen. So I basically stayed home and took care of the house and took care of her when she got home from the hospital. It was about a year or a year-and-a-half later that I decided to go back to school and finish. I switched colleges and finished in art.

The first semester at school I lived at home, and then someone offered to share an apartment rent-free two blocks from the campus, so I moved away from home at that point. I was twenty-one. After that I lived away from home for the next ten years. I shared apartments and I had my own apartment in Providence, and then I moved to Maine. From there I went to Ireland for not quite a year. All that time there was still a very close communication with home and especially with my mother in particular. And at that point I decided to become a nurse, and it made more sense to me financially to live at home while I went to school, and then most probably I’d move back to Maine.

It was by this time that my mother’s condition included diabetes, cirrhosis, high blood pressure and obesity. The cirrhosis was from too much chemical intake, a result of taking so much pain killer over thirty odd years to kill the pain of arthritis. She was not wise about taking the medication. She also had a weak heart, which she had had all her life. At one point, when she gave birth to one of us, her heart stopped. She had to be given five minutes of heart massage to get her going again.
END_OF_DOCUMENT_TOKEN_TO_BE_REPLACED

Aelwie Cave
Create a free website or blog at WordPress.com.